Why I Didn’t Jump from a Bridge

The year I turned 20 I asked God for birthday flowers. This doesn’t sound like an extremely uncommon request, coming from a Millennial woman. Except that I’m allergic to flowers and my birthday is in February.

I asked God for flowers because I wanted to die. Flowers are for funerals, so I thought he’d understand.

It’s a long story how I came to be where I was in January of 2014. It begins with a history of hyper-religious raising and torture. It ends with social rejection from my entire community.

When you’re in the center of the storm, they’ll tell you that. You won’t believe it, and you certainly won’t want to hear it. Maybe you don’t need to. As strange as this may sound, perhaps you just need to experience your pain. Validate it – make it beautiful, and relevant.

I’m here to give you my reason.

Back in Tennessee, many would agree that this was the most bitter winter in memory. The dark, cold, and snow can break even the highest of spirits. For people with mental illness, it can be devastating.

For some, depression is medical. For me, it was the direct result of trauma suffered by perpetual, systemized malice. Even worse, this abuse could not be prosecuted by law because the story was too obscure. There wasn’t a therapist for a kid too afraid to talk about psychological torture and the Luciferian mock crucifixion rites done to her. Even now, it would be too unsafe for my loved ones to seek retribution of any sort.

For me, depression was like being conscious following my own murder. I felt like a flower cut from the field. Sure, I had the appearance of beauty and health, but I wouldn’t last long. I was wilting rapidly.

The snow had set over my rural forest neighborhood. There was a creek bridge that ran across the street at the end of my driveway. With the frozen winter rains, it would be the perfect temperature for a terrible plan. I had been used for many dramatic exploitations before. Perhaps it was the time I made my grand exit?

I wanted to do it as they do it on Broadway. I had to have the right timing, the perfect music…The flowers. I asked God for flowers – my final validation.

I never expected how they would actually come to me or what it would all mean.

I was reluctant to end it.

I’d always been afraid of drowning in that creek. No one who is at the edge of their bridge is truly safe in the jaws of death. It isn’t a psychotic break or even revenge. It’s the final aneurysm of a comatose soul. I was walking in terror and a dream all at once, and I could not find the exit from the nightmare. I had nowhere to go but down. Down into the frigid water.

To add to all of the above, my grandmother died. That was the last straw. I decided that after her funeral, it would be time to go. I would have someone on the other side now. It would be hard, but easier than continuing to live in that haze.

The answer to my hopeless state came from the tomb itself as I was standing in the mausoleum with the other mourners. They were separating flowers from the Pall, spreading all the living arrangements on the floor before the grave.

I was greedily looking on as they were passing some of them out to the relatives. Only the children of the deceased were supposed to get a bouquet. I was a step-grandchild. The flowers I had wanted for my final birthday were right there, completely out of reach. The grave I wanted was at my fingertips, out of reach. I was angry, and I was confused. I decided that when I went home, and the sun went down, that would be the end, right or wrong.

But then, there was an old woman there who stopped in the middle of what she was doing. She plucked up a full bouquet of blood red roses.

“No one took these. So, they’re for you. Bless you.” She said as she pushed them into my arms.

Suddenly, I was standing at the door of the tomb in total shock. Mourners buzzed around me, talking about my grandmother’s life and how beautiful it had been. All I could think was that she must have asked God, she requested that upon her death, that she give me the gift of life.

Under the bleary sky, with the bitter snowfall teasing the tops of my roses, I saw the sun behind the clouds. I was in the grave, but I was looking out of it. Out and up. It was at that moment that I understood. There was no reason to escape the pain. Or to even try and force past it.

Standing there, I realized that I was not alone. I had been heard by my grandmother on the other side. In that mournful moment, with the shivering winter doves cooing away over the soupy graveyard, with a congregation of people dressed in black, there was something so beautiful and quiet.

And I realized, life is precious because it ends.

I had a choice because I was standing there in the sun, no matter how far away it seemed. Because in all that world of gray there was still the vibrant red in my arms. Red like the blood that ran between us. Red like a heart filled with love. I was still alive so I still had a choice. The faintest thought came to me, and it changed my life. A positive sliver of reflection in the middle of all this turmoil had the power to save me.

That river’s water is still rolling on. It’s warm now; filled with bugs being swelled by the Summer rains.

You may ask if my pain ever ended. No, it didn’t. But just like the snowfall and the rain, it has its own beauty. It has to exist so that I can truly value the warm, sunny days when they come.

That river’s secret is a simple one. And, like my life, that river rolls on. It keeps moving forward. 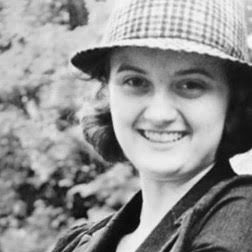 Rachel Brooks is the owner of a small writing service and the web media manager for Shiloh-Goshen Foundation Ghana. She has struggled with depression for years after surviving a religious cult as a teenager. Through Sad Runner, Rachel shares her story so that others can learn from her experiences and know they are not alone.